You are here: Home / News / Max goes on a mission trip to Honduras 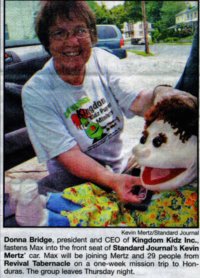 MILTON— Standard Journal’s Kevin Mertz and 29 other local residents aren’t alone in their preparations for an upcoming mission trip to Honduras.

The group, which will leave June 17 for a one-week mission trip to the Central American country through Revival Tabernacle, Watsontown, will be taking Max, a traveling puppet from Milton’s Kingdom Kidz Puppet Ministry, along on the trip. Everywhere Max travels he carries with him the story of Kelly Lazarus, a member of the puppet team who passed away Feb. 11, at age 46.

Donna Bridge, president and CEO of Kingdom Kidz, said Max and another puppet were donated to the puppet ministry in November 2008 by the Janet Weis Children’s Hospital, of Danville. Lazarus, who Bridge described as very shy, came out of his shell by operating Max at a number of the group’s shows. With Lazarus at the controls, Max quickly became one of the stars of the puppet team.

Shortly before Lazarus passed away, Bridge said the puppet team decided to send Max on a tour across the country in order to give the puppet team a break from his antics, and to raise awareness of Kingdom Kidz.

“Kelly smiled and nodded his head, so I knew he wanted to go,” Bridge said, adding that he passed away before he had the opportunity to go on a mission trip. “Well, now Max goes in Kelly’s place,” Bridge said.

“The Kingdom Kidz know that God works in mysterious ways … Max is going to share the gospel with those in Honduras.”

The group from Revival Tabernacle will be traveling to Choluteca, Honduras. While in the country, the mission team’s activities will include delivering food and supplies, interacting with orphans and the needy, and delivering compassion and hope for the future.

Medical professionals traveling on the trip will also be meeting with elderly Honduran residents, mainly providing relief for joint pain and other related issues. Several members of the group will be using Max in a puppet show they will be sharing with the orphans and poor in Honduras.

“That thrills our hearts more than anything, just to know that Max will be telling the children there about Jesus,” Bridge said. “That was Kelly’s desire too. Only God could have worked things out this way.”

Bridge was filled with smiles recently as Mertz arrived at the Kingdom Kidz office to pick Max up to take him on the trip. She gently carried the puppet to Mertz’ car, fastened him in the front seat and waved goodbye as Max started his mission trip.

Since being picked up at the Kingdom Kidz office earlier this week, Max has been busy getting ready to go to Honduras. He spent some time Wednesday at Revival Tabernacle practicing his show for Honduras for children at the church.

Groups or individuals interested in receiving a visit from Max may contact the Kingdom Kidz by calling 742-0379 or by visiting www.hiskingdomkidz.org.

For more information on supporting Revival Tabernacle’s mission trip to Honduras, where the group will be distributing frozen chickens to the needy, contact the church at 538-2000.