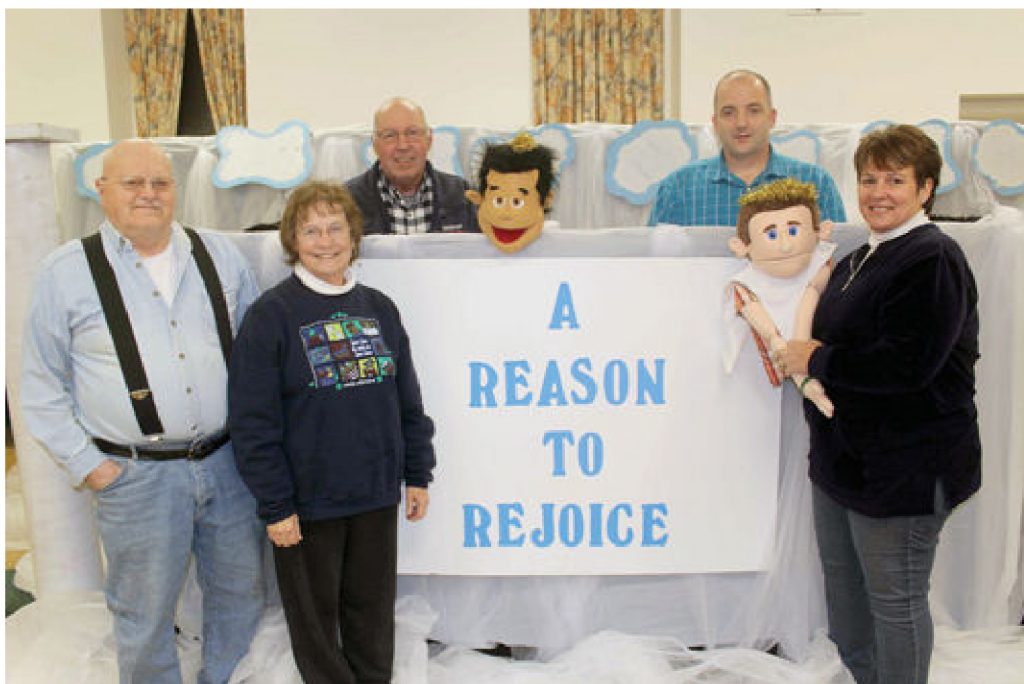 Kingdom Kidz have a reason to rejoice this holiday season. The organization has been given the opportunity to purchase the former Watsontown United Methodist Church building for $12,000. Front and from left, Kingdom Kidz’ Doug and Donna Bridge, along with Lisa Derr. And rear, church board Chair Russ McClintock and incoming Kingdom Kidz board Chair Tedd Brungard.

WATSONTOWN — In 2014, the Kidz found a home. Now, they have an opportunity to turn that home into their own, while preserving the heritage of a building which has served as a ministry center in the Watsontown community for more than a century.

“I asked the board if we could look for a permanent place for Kingdom Kidz,” she said. “We had everything we owned stored in four different places.”

Realizing the former Watsontown United Methodist Church building on East Third Street had been vacant since the church moved into a new facility in 2010, Bridge reached out to Tedd Brungard.

Brungard, who is the incoming Kingdom Kidz board chair, was in 2014 a trustee for Watsontown United Methodist Church.

“I set up a meeting with the trustees and the pastor,” Bridge recalled. “We were there 10 minutes and they said ‘we want you there.’”

Brungard said the puppet ministry team was a good fit to become tenants in the former church building.

“They are a nonprofit ministry that would continue to facilitate usage of that building,” Brungard said. “We saw it as a partnership. It has been all along.”

Russ McClintock, chairman of the Watsontown United Methodist Church board, said the church is glad the puppet ministry is operating out of the former church building, which was constructed in the early 1900s.

“As a whole, the church is very pleased,” McClintock said. “I know the people of Watsontown love to have the puppets here… It seems like every time you turn around, they have an event going on.”

Recently, Kingdom Kidz received a proposal from the church. According to Bridge, the church is giving Kingdom Kidz the opportunity to purchase the building by June 1 for just $12,000.

“We had to find an owner for this building,” McClintock said. “It’s a good fit… (Kingdom Kidz will) get something they can call their home.”

Immediately upon receiving the offer to purchase the building, Bridge was instructed by the Kingdom Kidz board of directors to begin calling banks to inquire about loan rates.

“God spoke to my spirit and said ‘you’re not going into debt,’” Bridge said. “We just started a capital campaign… At this point, we have $4,100.”

In addition to appealing for donations, Kingdom Kidz is planning several fundraisers to support the cause.

A silent and public auction will be held, at a date to be determined. Items on the auction block will include gift baskets and gift certificates.

Members of the puppet team, church and community at large are confident the puppet ministry will raise the $12,000 needed by June 1.

“I have no doubt you will reach your goal,” McClintock said to Bridge and Brungard.

Bridge said both the Milton and Warrior Run Ministeriums have long been supportive of Kingdom Kidz’ overall efforts.

Recently, while discussing the capital campaign with the Milton Ministerium, Bridge said one pastor asked what the puppet team is going to do when it raises more money than what’s needed to purchase the building.

“I said ‘God knows what we need,’” Bridge recounted. “He has been so faithful to us.”

In addition to giving Kingdom Kidz a place to store its equipment and practice for performances, moving into the former church building has allowed the organization to expand in other ways.

Kingdom Kidz Team and Program Director Lisa Derr said the organization offers community programs two Fridays each month from its home on East Third Street. In addition to performances by the puppet team, community artists also participate in those programs.

“This is a positive influence taking place in this community,” Brungard said of Kingdom Kidz. “We see potentially more outreach (in the future).”

Donations to support the capital campaign can be sent to: Kingdom Kidz, P.O. Box 23, Watsontown, PA 17777.

Staff wrier Kevin Mertz can be reached at 570-742-9671 or email kevin@standard-journal.com.